"I don’t think I’ve ever had a happier evening. It really was great, masterly, playing Music all through. No one can touch your Gaspard—it was an immense achievement—so were many of the other things. Most of us were just rendered speechless! You must go all over the world doing that and teaching people—by your fingers-and-mind—behind what Music really means[.] Bravissimo!!!"

&#151Excerpt from a letter by Tobias Matthay to Bruce Simonds on the evening of his Wigmore Hall triumph, July 4, 1928 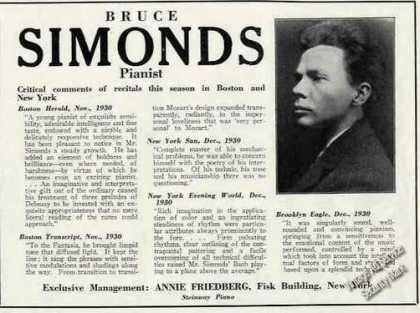 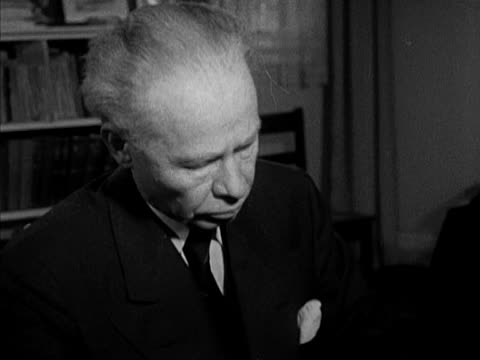 BRUCE SIMONDS, born in Bridgeport, Connecticut, had earned two degrees from Yale before arriving in Paris in 1919 to study composition with Vincent d’Indy, but he was so upset with the piano instruction he received there that he briefly considered refocusing his efforts toward music history. When he met an English woman who advised him that Tobias Matthay had some “new ideas,” he eagerly went to London in August of 1920 and soon abandoned all thought of continuing his studies in Paris. A stunning intellect and an extraordinary pianist, Simonds was offered a professorship at Yale in 1921, but he returned to London frequently through the 1920s, even teaching at the Tobias Matthay Pianoforte School in the summer of 1925. On July 4, 1928, he gave a recital at London's Wigmore Hall, and critics were so overwhelmed that one even cautioned aspiring Americans about “the obvious dangers attending the prodigiously high standard they have set in the person of Bruce Simonds.” In 1925 Simonds became the first president of the American Matthay Association, and in 1941 he became Dean of the Yale School of Music. By the mid-1950s, his reputation had become so pronounced that ten separate LPs were financed through private means to promote his artistry, followed by an eleventh containing two-piano works performed by Simonds and his wife, Rosalind—also a Matthay student.

LEFT: Bruce Simonds in his studio at Yale in 1953

RIGHT: A Simonds concert brochure from 1930


Bruce Simonds and the Power of Words